Spur of the Moment Reflections

Yesterday I booked my first direct flight with Norwegian Airlines from Oakland, CA to Stockholm, Arlanda next summer. Yes, it’s going to be birthday and midsummer celebration back home – and 4th of July. At the summer house. My uncle’s birthday. He is awesome – he always cracks a joke.

This morning when I woke up I had this feeling building up in me of upset. I should be very happy at this moment – I have so many reasons to be grateful – but there is one particular area, where I am not. Because it is violating my chore values of justice and integrity.

A poem came to my mind. I found it when I as a child was spending the summer at the summer house with my grand ma, my brother and my cousins. Our parents were there too during vacation. We had this book shelf of old books – all different kinds. I used to go through them and almost travel to a different time frame. One of them was my moms from graduation from high school, I think. All her friends had written in it, a greeting, some memories or poems, as best wishes for the future.

There is a little tiny word on our earth.
It eases pain. It eases cry.
The little word is “sorry”.

I can work, I can work hard and long. I can recreate. But don’t run me over, and expect more.

Another little note in my moms book read:

I wish you all the best,
but not the kids as the Katzenjammer kids. 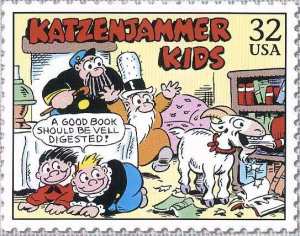 Don’t ask me why I remember that one. I guess I thought it was odd to write in a graduation memoir book. What I didn’t know then, that I know now, is that Knoll and Tott actually did exist. It wasn’t just a nonsense phrase. It may have been an internal joke – but it was based on the Katzenjammer kids, featuring “Hans and Fritz, twins who rebelled against authority, particularly in the form of their mother, Mama; der Captain, a shipwrecked sailor who acted as a surrogate father; and der Inspector, an official from the school system.”

The Katzenjammer Kids is an American comic strip created by the German immigrant Rudolph Dirks and drawn by Harold H. Knerr for 37 years (1912 to 1949).[1] It debuted December 12, 1897 in the American Humorist, the Sunday supplement of William Randolph Hearst‘s New York Journal. Dirks was the first cartoonist to express dialogue in comic characters through the use of speech balloons.[2] –
Per Wikipedia

Honestly – right now I feel like rebelling. Although, I know that a calm honest conversation is probably the best solution. I hope I can turn this moment into a comic script. With a successful never ending.

… a small dose of that is probably healthy. As long as I say “sorry”…

- where it all comes together...

definition of GRIT: firmness of mind or spirit

From the heart of Silicon Valley

a community for VR developers and enthusiasts

A blog about life, myth, and the Hero's Journey